Problem behaviors linked with gastrointestinal issues in children with autism

Many children and adolescents with autism often exhibit problem behaviors, such as aggression, as well as experience gastrointestinal (GI) issues, especially constipation. In a new study published in Frontiers in 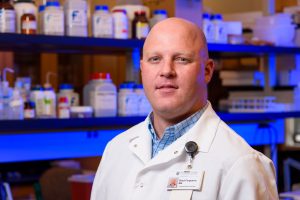 Psychiatry, researchers from the University of Missouri have now found that these common problem behaviors may be closely linked.

Dr. Bradley Ferguson, assistant research professor in the MU School of Health Professions, MU School of Medicine, and the Thompson Center for Autism and Neurodevelopmental Disorders, examined records from 340 children and adolescents with autism who are patients at the Thompson Center. Ferguson found that 65% of the patients examined experienced constipation, nearly half experienced stomach pain, nearly 30% experienced diarrhea, and 23% experienced nausea. Furthermore, some of these GI symptoms were associated with different behaviors, such as anxiety and aggression.

“We are starting to better understand how GI issues coincide with problem behaviors in ASD,” Ferguson said. “For example, we found that individuals with autism and co-occurring nausea were about 11% more likely to display aggressive behaviors. Therefore, addressing the nausea might help alleviate the aggressive behaviors which will ultimately increase the quality of life for the patient as well as their family.”

Ferguson and his colleagues also found that the relationship between problem behaviors and GI symptoms differed between young children and older children with autism. Aggressive behavior in younger children, aged 2-5, was associated with upper GI tract issues such as nausea and stomach pains. Older children and adolescents, aged 6-18, often experienced greater anxiety and were more likely to experience lower GI tract issues such as constipation and diarrhea.

Ferguson says that because autism can affect an individual’s social skills, speech, and nonverbal communication, it can be difficult for those with autism to effectively communicate their health challenges, such as GI discomfort.

“These findings further highlight the importance of treating GI issues in autism,” Ferguson said. “Many children and adolescents with autism are often unable to verbally communicate their discomfort, which can lead to problem behavior as a means of communicating that their stomach hurts. Understanding how these GI issues can lead to problem behaviors, or vice versa, can help shape future treatments for individuals with ASD.”

This study is the latest in this line of research for Ferguson examining the links between ASD, problem behaviors and GI distress. Previously, Ferguson measured the stress responses of children with autism to brief environmental stressors and found that children who had a higher, or more dysregulated stress response also tended to experience more GI problems, especially constipation.

Ferguson is currently working on a clinical trial with other Thompson Center researchers, including the principal investigator, Dr. David Beversdorf. The researchers are studying whether a common blood pressure drug, propranolol, may have positive effects on language and sociability by reducing stress levels in children and young adults with autism. Ferguson said that they are also monitoring GI symptoms in the patients enrolled in the trial.

“We are hopeful that propranolol will prove to be a valuable treatment option for some children with ASD to help reduce their stress levels which will hopefully lead to better language and social abilities,” Ferguson said. “If this is the case, reducing these stress levels could potentially help reduce some GI problems as well, as it is possible that these GI problems are linked to increased stress and anxiety.”