From upstate New York to the heart of mid-Missouri, Dr. Ben Black has had many stops along his journey. However, his passion for children with special needs has been the constant driving force that has directed him to the Thompson Center, where he will serve as the new Thompson Center director of medical services.

Growing up in the small town of Argyle, N.Y. in northeast New York state, Ben Black had two primary interests: helping children with special needs and learning more about the brain and how it works. To pursue these 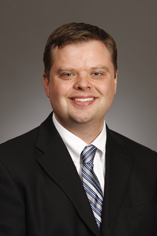 Dr. Ben Black is the new director of medical services at the Thompson Center.

interests, Black earned his undergraduate degree in neuroscience at the University of Rochester. During all four of his college summers, Black worked at Double H Ranch, which is a camp in upstate New York devoted to children with serious illnesses and special needs, including neurodevelopmental disorders.

“Working at the camp for four summers was an amazing experience,” Black said. “It exposed me to so many children with so many different needs, including children with autism and neurodevelopmental disorders. It really helped me define my career path.”

The next step on that path led Black to Yale University, where he worked for more than three years as a clinical research assistant. It was here that he met his wife, Nicole, who worked alongside him on clinical research trials for treatments for Alzheimer’s. This experience led Black to medical school at Jefferson Medical College in Philadelphia.

Dr. Black continued his medical training at Children’s Mercy in Kansas City, where he completed his residency in pediatrics.  That’s where he was first exposed to his current sub-specialty.

“During my residency, I did a rotation with developmental and behavioral pediatrics and it really seemed to click,” Black said. “It combined something I had developed a heart for, in children, and the part of the body I was most interested in studying: the brain.”

Having it all click into place led Black to pursue a fellowship in developmental and behavioral pediatrics at Children’s Mercy in Kansas City. One of the most glaring shortages in medical providers around the world is the lack of developmental and behavioral pediatricians. In fact, there are just over 600 of these highly trained physicians in the entire country. Top that off with an additional fellowship in pediatric clinical pharmacology and Black gained a truly one-of-a-kind area of expertise.

“During my training, it stood out to me that many medications are being used by physicians with limited evidence behind them as to how well they actually work,” Black said. “I wanted to learn more about how these pharmaceuticals operate in different populations of patients so I could better care for my patients and prescribe treatments that I know might actually work and work safely.”

Dr. Black’s unique expertise made him an obvious choice for the open medical director position at the Thompson Center.

“We are totally excited that Dr. Black is joining us,” said Dr. Stephen Kanne, executive director of the Thompson Center. “Dr. Black has a unique combination of skills, training and talents that will be an amazing addition to our Center. His extremely rare combination of expertise in developmental pediatrics and pediatric clinical pharmacology will enable him to best serve our families and lead our medical division.”

“The Thompson Center has tremendous momentum, which really attracted me,” Black said. “It is a relatively young center, but it has made such great progress in such a short time. It’s already a national leader in autism research and training and I am so excited to join such a fabulous team. Further, the clarity of purpose exhibited by Thompson Center leadership and its whole staff is such a draw. Everything is done with intentionality, in order to better serve patients and their families, and that is so commendable.” 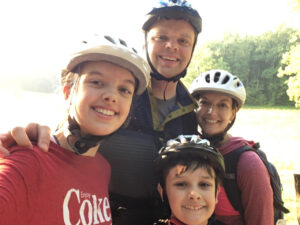 Dr. Ben Black with his family including his wife Nicole, and two kids, Julia, 12 and Peter, 9.

As well as working at the Thompson Center, Dr. Black will also hold a faculty position at the University of Missouri School of Medicine. Black is bringing his family to Columbia, including his wife Nicole, and two kids, Julia, 12 and Peter, 9. He says the whole family is excited for the move and he particularly is excited for the opportunity to advance his practice at the Thompson Center.

“Throughout my career, I’ve had the amazing fortune of seeing how far children with neurodevelopmental disabilities can come, how successful they can be when the receive the right care and support,” Black said. “It is an amazing experience to not only see that change, but to see the families experience that change as well. I can’t wait to work with the families at the Thompson Center and see that change with them.”